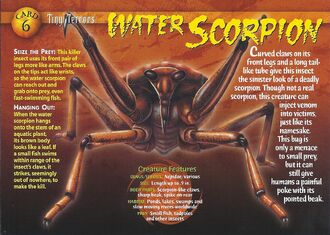 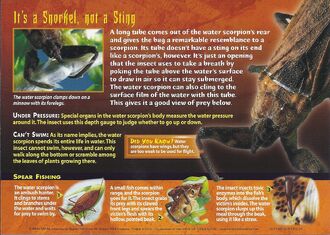 Small fish, tadpoles and other insects

Water scorpions have wings, but they are too weak to be used for flight.

Curved claws on its front legs and a long tail-like tube gives this insect the sinister look of a deadly scorpion. Though not a real scorpion, this creature can inject venom into victims, just like its namesake. This bug is only a menace to small prey, but it can still give humans a painful poke with its pointed beak.

Seize the Prey: This killer insect uses its front pair of legs more like arms. The claws on the tips act like wrists, so the water scorpion can reach out and grab onto prey, even fast-swimming fish.

Hanging Out: When the water scorpion hangs onto the stem of an aquatic plant, its brown body looks like a leaf. If a small fish swims within range of the insect’s claws, it strikes, seemingly out of nowhere, to make the kill.

It’s a Snorkel, not a Sting

A long tube comes out of the scorpion’s rear and gives the bug a remarkable resemblance to a scorpion. Its tube doesn’t have a sting on its end like a scorpion’s, however. It’s just an opening that the insect uses to take a breath by poking the tube above the water’s surface to draw in air so it can stay submerged. The water scorpion can also cling to the surface film of the water with this tube. This gives it a good view of prey below.

Under Pressure: Special organs in the water scorpion’s body measure the water pressure around it. This insect uses this depth gauge to judge whether to go up or down.

Can’t Swim: As its name implies, the water scorpion spends its entire life in water. This insect cannot swim, however, and can only walk along the bottom or scramble among the leaves of plants growing there. 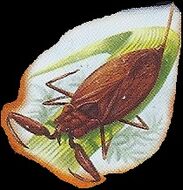 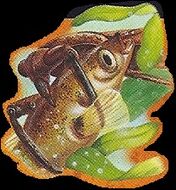 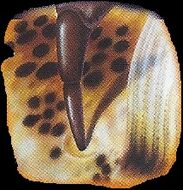